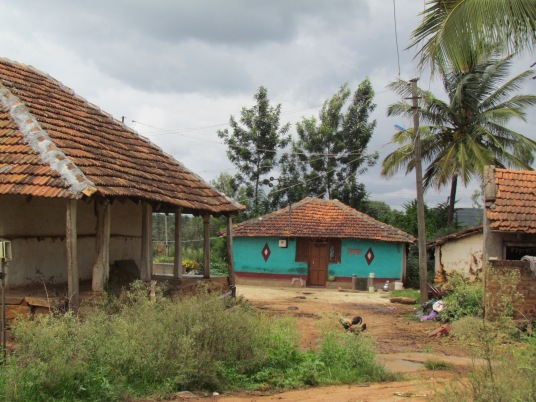 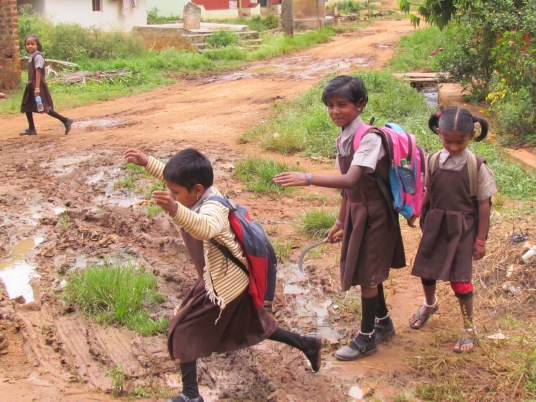 Manjula’s brother Raju, and his wife Deepu, daughters, Amrutha and Hamsa live in a small village of 290 people with around a 100 houses. Its 3 hours away from Mysore. It isn’t a quaint picture book village, even by Indian standards. It’s people are very poor. They do however have great character.

God only knows what they think of us arriving in a car, having driven here just for the day. At one point Manjula points out that the other villagers (not her family) will be shocked as she sits in my presence, they think I’m her boss ;-). Imagine how her life has changed.

The family always look forward to Manjula’s visits and this time, especially so, as it’s the first since the BIG trip to the UK.

At their house, the only door leads into the ‘hall’ which is maybe 9 metres square, in which there’s a couple of plastic chairs (probably borrowed for the guests to sit on) TV (gift from us) cabinet holding absolutely all their worldly goods, it’s where all the family sleep, eat and the copper/fireplace for heating the water is in the corner where there’s also space for bathing.   The only other room at the back, is where Deepu cooks on a stove. 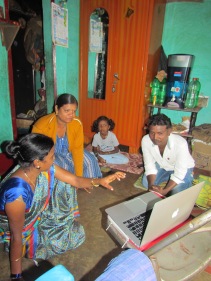 Well, of course they had to look at the holiday snapshots!… whatever the culture, its a friend/family obligation 😉 to have to sit through the photos. With pain there is gain!!! …. The rewards from the DIG trip are presents of clothing (suitably labelled ENGLAND and LONDON), perfume, soap and  English sweets: chocolates, sherbert liquorice, the ones that go pop in the mouth, were clearly a big favourite. Discreetly Manjula placed some money next to the Goddess Lakshmi. 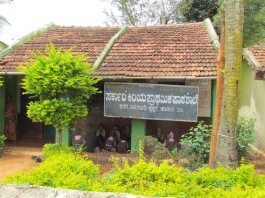 It’s a poor village and most people are related in one way or another, they are all from the same caste. They are mainly farmers. The odd person, such as Raju, works in construction. They do however have two small schools and children once they reach age 11 will go to school, at the next village.

Growing ginger…I’ve never seen it growing before and together with sweet corn, potatoes, Ragi, and the ubiquitous coconut, in the dark rich looking soil, it seems to show that this is a very fertile area.

We take a walk around the village. Most houses are similar, just one or two small rooms. We nip through the fields to visit Deepu’s uncles. They have a larger house but it has had two families living there. 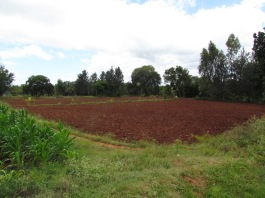 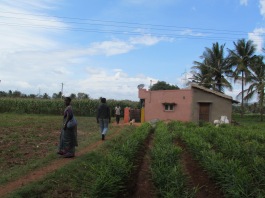 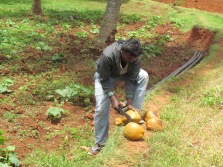 They seem to be completely off the network of canals so, they irrigate from rainwater and borewell. I have seen one toilet (the very basic toilet that’s supported by govt funds) while walking around, so I assume that everyone otherwise uses the fields.

Here’s Manjula using one of our established signals. She had just been for a no1. I know, I know, too much detail, so here’s a bit more. I’m now sitting here back at the family house. I’m stuffed. We’ve had rice (two types) a selection of fried bhaji, (carnivores had some chicken) all followed by Keer, and helped down with generous glasses of Lilt (lemonade). I’m wondering if I’ll manage the journey back before I need the loo. I’ve already used the bushes!

Electricity is maybe three hours max during the day and most of the evening, sometimes. It really brings it home to me, how materially rich we are and what a different life we lead! Its been a great trip and so nice to see the family happy to be together.

I’m now very aware that we should be sharing more and wonder what it is they really need.

There is a massive shift of the population from rural to urban areas. Raju’s wives uncles had three children and two have moved to the cities. It’s not surprising when people are so poor and they can earn maybe three or four times the usual rate, in work that’s more regular,  if they shift to the city. If they are lucky to get a thorough education they’ll definitely move.

We have a variety of signals. (see no 1 above) Another, is used (in other contexts) to signify glass half-full or empty, is used when we meet someone who’s a bit negative, a Marvin the Robot or Eeyore type or alternatively a very positive and optimistic person.

As I’ve said, it is a very poor village but it’s still important to respect one’s Gods and build Temples. The last picture is a relief copied from the Temple they are replacing! Manjula says it’s not to go on facebook so it’s hidden at the back here. This can’t be such a surprise, after all its in the country that gave us the Kama Sutra. 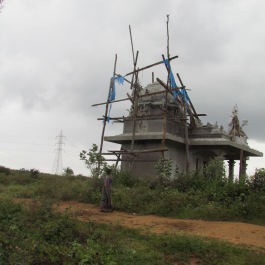