Our (Manjula and my) friends are really really cool and warm.

After three months I can appreciate (wrong word if it ever implies like!) three distinct and overlapping stages (not quite the right description) that also still exist, often all at exactly the same time.

The first is raw, extreme grief that fills your every moment when not concentrating on physical practical action things such as rituals and sorting things out. It still raises it awful ugly head and manifests itself in salty wetness every single day. Needless to say it also involved anger, pity, it was frankly messy. Sharing my feelings and the support of friends around the world was superb. Overall though it was and still can be really shitty. More on the three buckets of grief can be found here.

Second stage became more obvious and vivid when I was at Liz’s house (big ex, mum of my boys and still a great friend of Manj and I). On a small corner table was a photo from my eldest son Ben’s wedding with Manjula in the group. During the evening I found myself looking away from her picture as I was overcome by sad feelings. At that moment I properly realised what I’d been doing and what I needed to do next. The sad memories of the difficulties she experienced, particularly at the end and of her being snatched away needed to be and were being replaced by lovely memories of our time together, the adventures we’d created and how much of a difference we’d made in each other’s lives. I therefore spent more time Looking at her photo, appreciating her beauty; remembering the joy and the wonderful life we’d created. Things slowly start getting better.

Third stage. I’ve now met up with our friends in India, UK, USA and Canada to share our memories of Manjula. People’s care, kindness and compassion has been immeasurable. I now feel that whilst the above ‘stages%’ are still very much part of my life, and things will continue to be raw for some time, I need now to start pulling things together a bit, get a bit more focussed. To move from any regret to remorse, check article here. A critical part of that will be to confirm and clarify, speak out to Manjula, ask her forgiveness for the things I didn’t do, or wish I’d done more of or better, and recognise the amazing things we did do, thanking her for her time with me (that continues) and being an absolute star.

I love you Manjula and always will.

Please turn away now if you are of a nervous disposition. Alternatively you may wish not to visit our story site if you faint at the sight of blood or have strong feelings about body ‘art’. 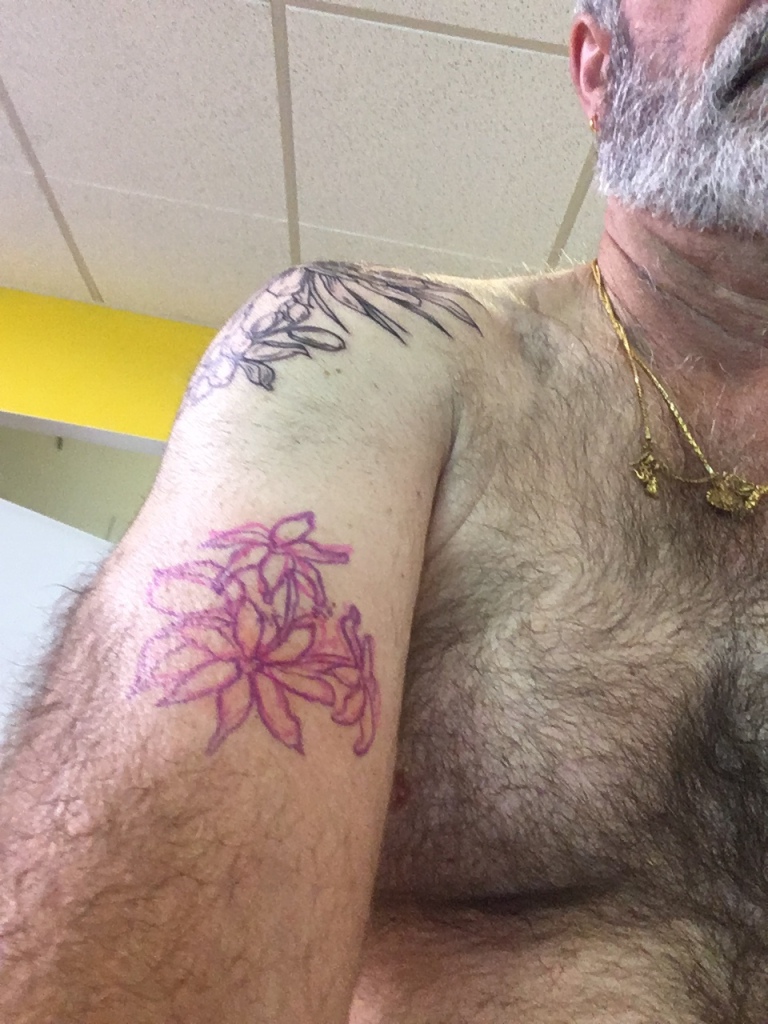 Yes, that’s right. Old man gets marked again. They all have significance. Grand revealing next week!

They are Flowers that Manjula loved and celebrated.

Manjula would rush in with the beautiful smelling Jasmin fresh from our roof terrace or excitedly predict which night the Queen (check here for more info) also known in India as Brahma Kamal, would break out.

From a young age and when she first started working for me (yes SHE WAS Originally the maid) Manjula would tie garlands of Jasmin for sale by the roadsides. 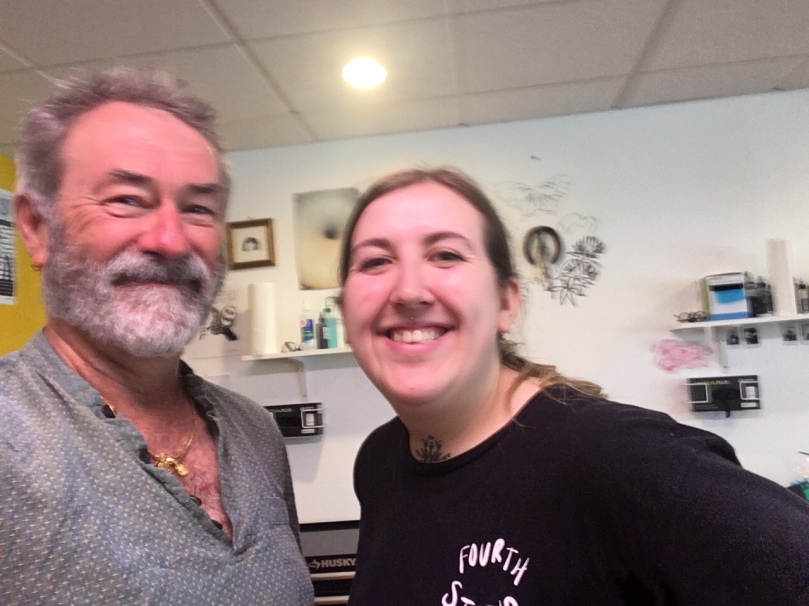 Ol, one of my wonderful sons with Hibiscus and Marigold a little example of our India flowers to leave behind in Vancouver 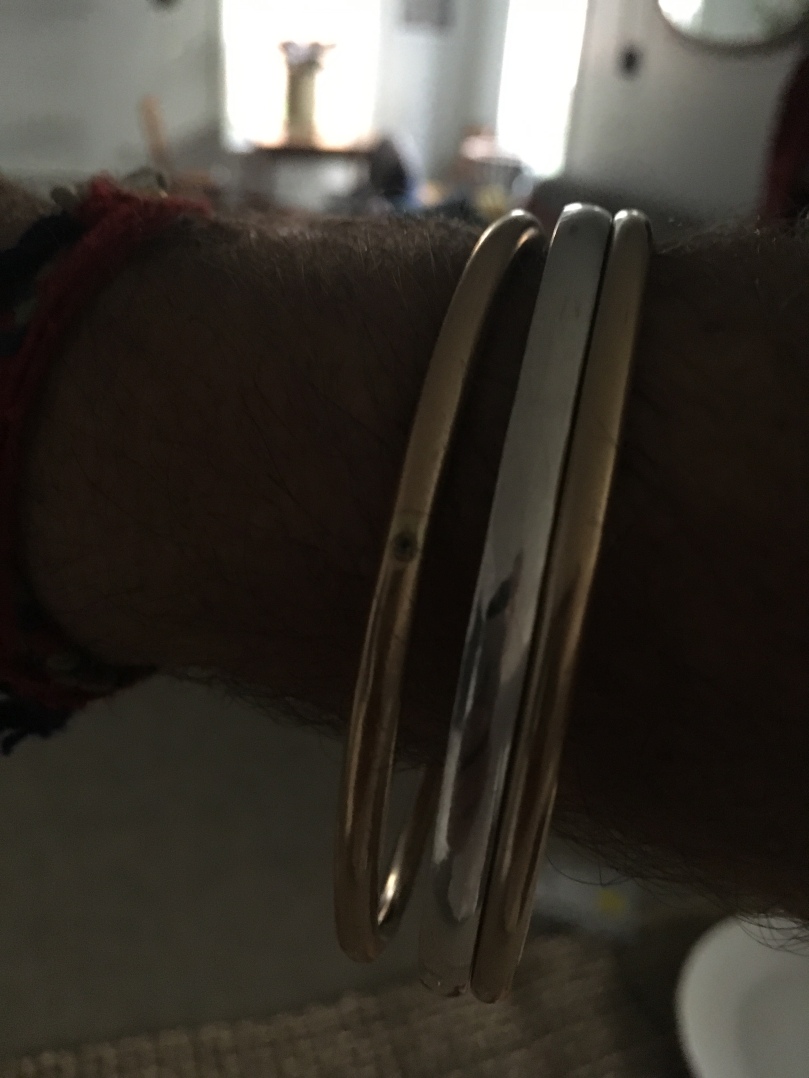 I’m currently jangling as the gold and silver bangles dance along my arm. It reminds me of walking down the street with Manjula (yes absolutely everything has the potential to remind me of my star) as there was a jingle jangle of her ankle chains as we walked along. One of my wonderful Manjula Memories.

The silver bangle is temporary.

When the price is right I’ll have one to the exact specification made in gold that’s will be engraved according to a design created by my daughter-in-law who is a jewellery designer in Hatton Garden in London.

It will be a new Manjula Memory 🙂 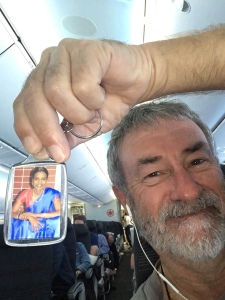 ‘What’s a muse? ….. A rare force, personified as a woman, who inspires….’ from Thin Man by Sarah Winman

In Hebden, a children’s book.

Wonky Donkey is a wonderful book

given extra fame from a granny reading it here 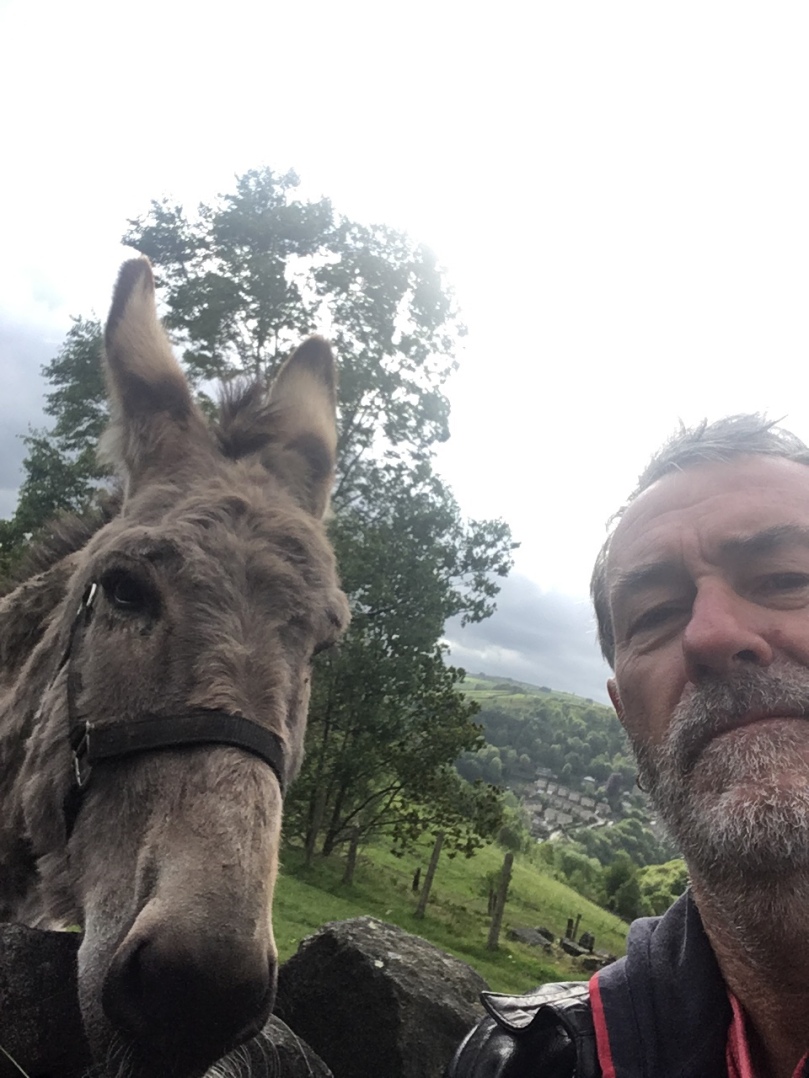 Great book, here’s the musical version that I played to my new friend

From the Velveteen Rabbit 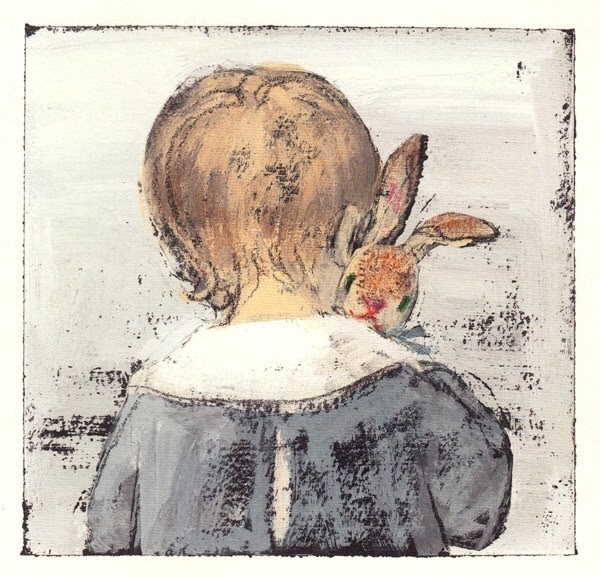 I love young children’s books. When my granddaughter Poppy was born I arrived with a box full of the picture books I’d saved from when Ben and Ols were young children. From that and subsequent books, she has a great collection, some of the best insightful and political stories.

A short story with a serious edge from Stephen Farrell

The cyclists meandered around the Rangoli, passed by the Hero Stones and entered the bustling square to find the usual rich mix of India.

Women fetching water and washing their pans, children playing and slowly becoming intrigued, being drawn to the new visitors. Men hanging out at the corner shop.

Slap bang in the centre was a fenced-in stone lingam, with the slow ooze of offerings running down its face.

The onslaught of their senses as they entered the square, the smells, the colours, the activity, the extraordinary mix of people living life to the full, reminded them all of their first experiences of this incredibly, unique, paradoxical, unexpected country.

The visitors, were themselves a rich variety of ages, nationalities and experience, from Europe, down under, Canada and a couple from Mumbai.

Everyone saw and experienced something subtly different. Maybe it was the different housing ranging from the old mud single room dwelling with its country tile roof, or the three storey concrete towers; the clothing, the women washing the front of their house, dealing with the children, the smiles, the welcoming, the dust, the noise, the smells, the chilli and lemon hanging in the doorway, two wheelers, the multiple designs of Rangoli, the auto rickshaws and the old ambassador, the hanging Mango leaves left from a recent festival, the constant presence of Gods and their many temples and symbols.

That cacophony was reminiscent of all that is India, where different things jostle for attention, cheek by jowl.

Now the group were engulfed with interest from the local people… children posing for photographs… women carrying water and smiling as they passed… the lounge lizards at the shop, the friendly stares and conversations were like a returning boomerang and neatly reciprocated….so we wondered out-loud, who is really watching who?

Most definitely in these moments that make up every day we were building bridges and breaking down walls . Cycling helps us to be participants, to be travellers and perhaps less of the transient tourist.

It was however time to move on….

The flow of cyclists quietly moved through the remaining narrow streets in this compact community in Mysore.

We gently pass amongst the houses of the poor and the not so poor, cattle ambling or hanging out in their house sheds, cow pats drying, people greeting us, past endless local temples. This represents a traditional way of life that in some ways has unchanged for hundreds of years. Its people may have little in terms of material goods but have a quality of life that the richer west are looking to rediscover.

Just minutes away from the Palace at the Centre of the City. It’s a reflection of the past, of times gone by, of the village that grew and existed way before it was absorbed into the city, yet still retaining much of that earlier character. Above all, people remain connected to each other creating an atmosphere and lifestyle that can be both positive and life enhancing.

Like the society of which its part. Being taken over whilst retaining its character.

Like India itself regularly invaded over its vast history, absorbing influences without losing its essence.

On our continuing journey we pass through many more areas of the city that seem somehow less colourful, less inter-connected, the community less active, its dustier and dirtier, congested with traffic, the activity is commercial, people setting up shops cooking breakfast, frying samosas, patting breads, its still active but somehow its different ….. something about it is diminished. Its much more ‘developed!’ in a simple sense.

We stop for a chai, an opportunity to consider what we’ve seen. Our different life experiences bring an added dimension to these conversations. We’re all committed to gaining insights and growing through sharing our, opinions, culture, humour.

In our view, there is nothing to quite match that first neighbourhood and its lively community. Its remarkable in many ways and somehow retains something of its original spirit, people are out and about and outgoing, friendly with easy communications whether its a smile, the one handed namaste, the head rock and roll, above all it seems connected, people gather together when others need help, the community is somehow healthier and seems unbroken as its not lost its spirit to the urban juggernaut.

In contrast other areas of the city seem to have something missing.

The connected community, its traditional approach compared to the other more ‘developed’ areas, can be seen to reflect the challenges facing the bigger city. As we grow and change there is the risk we could lose what makes us special. There’s a clear message that we should recognise what’s important and not lose the richness that we have before its too late.

Overall the city has an incredible mix, institutions set up by the Maharajas to serve the community to help with their health, to develop a vocation and gain an education, for all sectors of the community from wrestlers to Tonga drivers, from villagers wishing to better themselves at college to the city dwellers, the opportunity to meet and share their grievances, everyone can be part.

Here, there is, something of a metaphor for Mysore. The city has managed to retain its human scale in the face of urban development, it has an essence worth keeping, a friendly open aspect, connections between people, traditions, with history oozing from its porous buildings and abundant greenery, whether in the form of its formal gardens, the tree lined avenues, lakes and parks. Yet it is changing, it has to and will develop but we need to mimic what happens in the small village or in this great nations history and hold onto what’s special and makes it unique, the magic of Mysore.

Stephen is from the UK and has a varied career in charities, government and business, the main emphasise of his work has been to help people engage and connect within their communities or organisations. More recently establishing “Seeing is Believing Events” in India to encourage businesses to be more responsible and create leadership programmes for corporations. Stephen has two adult sons living in Vancouver, Canada and London, England and a gorgeous granddaughter.  He now lives in Mysore, where he’s now set up MyCycle: Mysore Cycle Tours to help visitors discover Mysore, Srirangapatnam and their surroundings at a human pace.