“yes Steve. But what have your brought us to a construction site? There are so many in London, why have we travelled all the way to Mumbai to visit a site?”

Nevertheless we continued our study tour, they were being tongue-in-cheek but there was a serious question behind this, you don’t waste Company Director’s time!!! The senior executives from a range of multinationals in the UK were led by Ian Smith, MD of the UK part of Oracle Corporation. They saw the wooden scaffolding, the women carrying building waste on their heads, the shanty living conditions of the ‘out-of-state’ itinerant workers. All very different from the safety conscious sites in London but still they didn’t get it.

Then we walked into a dilapidated building in the corner of the site….and the light bulbs began to switch on…

they began to get it.

They saw that the construction worker’s children were being cared for and educated in the safety of a nicely decorated, clean and comforting environment. The NGO Mobile Creches’ staff were doing wonders. They saw the tremendous service and heard from the workers. Of course, many if not most other construction sites did not have these sort of facilities. In those cases children would be often left to roam the site where their parents lived and worked. This was together with the inherent risks and likelihood they would become child labourers. That was the crux of the matter.

more light bulbs went on, it had worked like a charm.

The executives begin to realise why I’d organised for them to come here. They all had suppliers or subsidiaries or their own companies that had construction sites here in India. They, their colleagues and their customers back in the UK would not want to be associated with sites that put children in dangerous situations nor helped provide a safe supportive caring educational environment. So we’d highlighted a potential problem, a serious business risk and an area where they needed to check their current polices and practices. Here was an opportunity to be socially responsible that also served the business and of course we’d also given them a ready made solution, it was one of those win win situations, a no brainer.

That’s how the Prince’s Seeing is Believing works

The executives were on the first event organised outside Europe, in 2006 in Mumbai The Prince’s Seeing is Believing events had been tremendously successful in the UK for over 20 years

It was also featured in article in Ethical Corporation…..

After a series of similar visits helping bring corporately responsibility alive and to show its relevance to even the most disconnected business, the delegates were to join executives from around India for one of the first sustainability conferences held in India in partnership with the Bombay Chamber of Commerce at the Taj. The following week the team were to deliver a series of interactive workshops to show small business here in Mumbai how being a responsible business wasn’t just about community partnerships and that it also related to all aspects of business behaviour and the big clincher was, it would help the business survive, grow and thrive….

I’d organised the whole thing jointly with Malcolm Lane the Corporate Affairs Director from TCS in London,(an inspiring man and more of him later) with an amazing team from from TCS in India, Bombay Chamber of Commerce, colleagues from Business in the Community and Impact International in the UK and the series of NGOs we highlighted on the event.

The executives would go back and report on what they’d seen and how they as a company were planning to act to demonstrate their own credentials as a responsible business to HRH the Prince of Wale, all very neat, when it works…

Ok so back to the Prince and Vandana (sorry Vandana, I feel we’re first name terms as you’ve had so much influence on my life.) My first visit ten years ago to India, I fell in love with the place and on my return to the Uk was on the look out for anyway to get me back ….. I’d go out for an annual holiday each winter but there was something more….Vanadana’s article and the Prince’s memo to my CEO led to me organising these events in India

me, I subsequently went on to help organize more of these events here in india and then an innovation to help design leadership programs that provided valuable experiential learning experiences through short collaborations with community based NGOs here in India.

thank you to the team Malcolm, Peter, Jo, Simon, Vandana (from BCC and now HSBC), Prema (from BCC then to Vodafone) ( the business executives who came, particularly Ian and of course the others… HRH the Prince of Wales and Vandana Shiva for helping me get so connected to India

The BJP has won a landslide victory. The press and media in general is full of analysis of how, why and what it means to us in India and the wider world. Who knows what it means?

Modi has already initiated many changes. Amongst them, he’s introduced a presidential style in the election, utilised the social media and shown great leadership, all to great effect.

One thing I’ve noticed something new, on a morning shortly after the election.

In one of the parks near my house, members of the RSS (wikipedia labels it a ‘para-military volunteer Nationalist Hindu group based on selfless service to the nation’ although the neutrality of the article is disputed) who have close links with the BJP, will meet once or twice a month, in their uniform of shirt and khaki shorts, to parade and drill. At the most there are 2-3 usually elderly people.

Shortly after the election, there was a parade of maybe a dozen young men from pre to mid teens parading in the park. The elders looked on. So, Id say that the election and the impact of BJP is influencing younger people and their interest in the nationalism of the RSS.

and who knows where it leads….

We await the other changes…

Sand Karma, from cradle to grave to be born again. The long tentacles of the mafia imprisons the sand by dredging the lakes and rivers, looting the embankments, stealing sand wherever it can, and bribing where it needs to… Dotted around our countryside we see in our rivers, small round boats like metal coracles or Bella (Jaggery) cauldrons or gangs attacking the river banks. These are the starting point for the convoys of bullock carts filled with the precious cargo.
After a sometimes long and arduous journey from river bed or bank, to cart, to truck, to city distribution point (to become official) and then on again (its a wonder there’s no sand travel sickness or maybe there is) to be dumped, unceremoniously outside the mushrooming building sites, found throughout the city. Only then to be reincarnated, as a grey mix, for the greater good of the ‘development’ (some might say ruin) of our great heritage city. 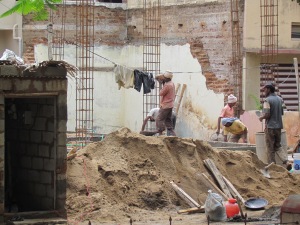 But this isn’t a sad tail of the demise of sand, the loss of its identity or of its sacrifice to the greater good…..no way.

One or two of our sand grain friends, reunited with water (their very own vehicle) from the previous nights torrential rainfall, seize the opportunity and escape form the constructors piles and become part of a great escape.

This morning the roads are covered with a layer of sand, in time, some might be scraped into little piles and recaptured but some will have managed to reach the storm drains, and on to a new life.. 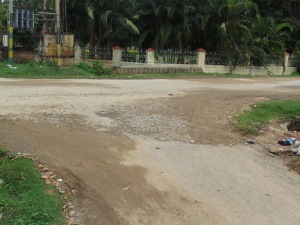 So next when you notice sand on the road and maybe you feel a bit irritated by the sand on your shoe. Spare a thought for the hard life of sand. Remember the triumphs and tribulations of the grain of sand and its great escape in its long march to the sea.

Well that’s not strictly true, but without them really knowing, they were a significant help in my move to India and all that we have here now.

The Prince of Wales, whilst he’s next in line to the throne in the UK, is amazingly ‘in touch’ with key issues facing our societies.. Whether it’s architecture, environmental impact, young people or as in this case, what it means to be a responsible business, he has many ways to keep his ‘ear to the ground’, for example, through an impressive network of contacts. Vandana Shiva, is one of them. Vandana is an academic and activist based here in India that really takes action and brings theory into practice to make a real and lasting difference.

Ten years ago after my first visit to India I returned at the end of a short sabbatical back to my employer who was Business in the Community (BITC). For twenty years BITC had worked to promote responsible business practice (or CSR) amongst UK based corporates. (some might say, its a world leader in the field) My role was to advise, guide and support various corporates in their attempts to be more responsible businesses. While I’d been away in India, Vandana had written to the Prince, highlighting a whole series of issues about business behaviour. Let’s just say their behavior wasn’t consistent with their stated values particularly in an international context. No surprise there then!

So to cut the proverbial long story short….. The Prince suggested that Business in the Community, of which he’s President, should begin to work more internationally. As a first step we decided to pilot his highly successful Prince’s Seeing is Believing events (executive study tours) in India. Wow! Just what I was looking for. An excuse to get back to India and return on a regular basis. I’d fallen in love with it’s people and places. Of course I over-excitedly volunteered. I therefore set up ( in addition to my normal job of course) a series of round table discussions in the UK for businesses who were also operating in India, organised three pilot Prince’s Seeing is Believing Tours, a sustainability conference with the Bombay Chamber and identified partner organisations throughout India.

So through the Prince’s Seeing is Believing events, I’d organised, I became a guide for executives visiting India where we tried to get them to see beyond the AC bubble of their hotels, offices or cars. To take them into communities and help them to begin to think what it meant to be a responsible business, in the Indian context.

Above all. I’d got back to the India I loved, with the promise of repeated visits and had a fab excuse to get to know the people and the country on a completely different level. I met and got to know some of the incredible people setting up invaluable projects to reach out to some of the poorest people in greatest need. In my own small way I’d help engage corporates in partnerships with Indian communities and their organisations.

Now of course, I live here. I’m still a guide. Whether it’s for tourists on my cycle tours here in Mysore or corporate participants in the workshops I deliver in London for the CR academy. So I thank Business in the Community, and indirectly HRH Prince of Wales and Vandana Shiva for that first opportunity to fulfil my India destiny.