We’ve received many comments and questions from around the world wondering what it’s all about!? and more to the point how will it affect visitors to India? Recent UK guests who were caught short have been able to pay through my UK account, others have had to join the queues.

We hope that it will be sorted soon so as not to affect the one’s who will arrive in the next few weeks!

As we’ve mentioned: the Modi Government has overnight deleted 500 and 1000 Rs notes. Ostensibly this is to tackle corruption and counterfeit notes. I reckon its to show strong government and to lift people, (a significant minority are not known to the authorities and therefore don’t pay tax), onto the ‘radar screen’ and therefore to become formalised. Previous steps have included introducng the countrywide ID or Aadhar card and pushing people who receive state subsidised staples (such as rice and Kerosene for cooking) to open bank accounts. The big crooks are, of course, unlikely to be caught out. Its a fact of life that a certain percentage of all trade is ‘under the counter’. Take for example: buying a house, a percentage will be ‘over the counter’ ie seen and therefore eligible for tax, its source having to be accounted for, whilst a percentage will be ‘under’ and therefore not eligible, unseen. Simple really.

It has however had a significant effect on absolutely everyone and of course, as always the poor suffer disproportionately. People have to queue to get the new notes (I’ve seen the queues starting before 7 am), ATMs are still not working and its only possible to get a few thousand rupees, if you don’t have bank account. As I often do, I really feel for the poor people who are constantly getting the ‘run-around.’

Its also affected us… most of our income comes in cash…so quite legitimately and with the knowledge of my accountant, I generally pay company bills via my personal account and it all gets reconciled later. The nett effect is that we do have a fair amount of cash at home. So like millions of others I’ve been to the bank to deposit all the cash we hold and withdrawn the maximum allowance of  10,000 Rupees. I may have to show evidence to the Tax Authorities that the money I held is legitimate (which it is), as its earned via the business or from the UK. 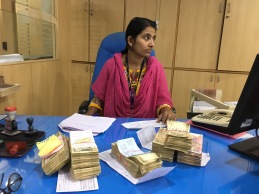 I can’t quite believe that  other governments would be able to do something so revolutionary, so seriously inconvenience most of the population and get away with it.