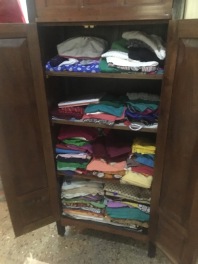 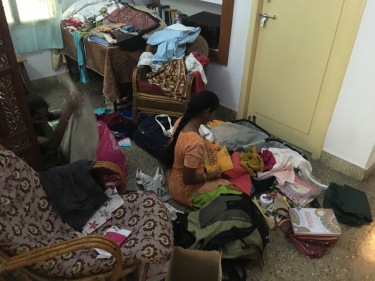 again and again and again… meals for the elders at the Ashram, her Clothes for Sowbhagya and Chic, who work for us and the old lady who’s mud house is featured on our cycle tour. A Sari for Vidya who’s expecting her first birthday next week. Thank you Ina for all your help

Don’t for one minute think ‘out of sight – out of mind’ or that I’m not still with you.

I am here…… and you worry me

Have you learnt nothing?

I came as your maid, then nine years later, do you know what I’m going to say?

That doesn’t mean it’s alright to lean on me soooo much. You should also stand on your own two feet.

I taught you how to manage things. All you had to do was copy me. Now look at what’s happened. The house is in a mess, the cleaners aren’t cleaning even when they manage to turn up, and you just hang around doing nothing in particular. (reading? I’ve told you its overrated) and the list of jobs, like hanging those pictures you’ve not done, just gets longer and longer. You seem to be specialising in self-pity. Now that’s sad. I don’t know about glass half full more like empty empty.

Please get your act together.

Above all ….. realise that I love you more than anything and will always be with you.

Where have they gone? 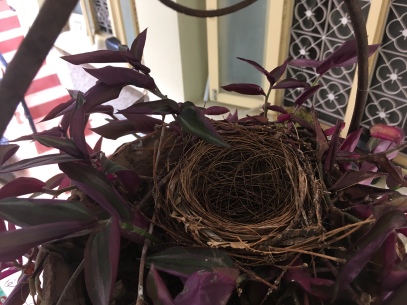 Its an incredible job giving birth, raising your children, being there for them, setting them up with the right skills, having to let go, being there to support whilst pushing them to be independent… its difficult to get the balance right.

There are so many risks

The fledglings have flown

It was not an easy process, as you might imagine.

Mum and Dad found a great place to nest, in a hanging basket under the driveway roof. It was so quiet at the beginning (were they ever here?) so much so we thought they were being neglectful but the eggs were hatched and three fledglings made their appearance. 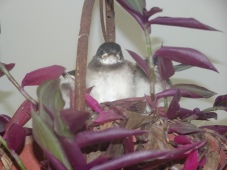 One seemed to be a tad bigger than the others, the BIG BROTHER

Today however, just a few days later, has been really hectic.

They flew the nest and ended up all around the drive. We’re using the term ‘fly’ a little liberally, it was in fits and starts… but they were moving and perching……

It did help us realise what a relatively safe place it is and thats maybe why we’ve actually had THREE nests here this season.

Nevertheless in the chaos in the drive there was one fledgling missing and the parents (and us were frantically looking).

they are still hungry guys

But the lost one was found

The parents managed to corral them, get them perched and fed, on one of the plants behind the chair near the front gate! 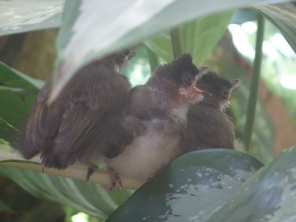 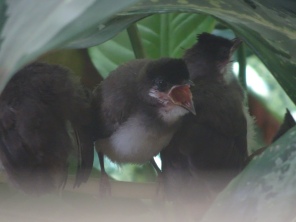 Where they still are.

sorry about the standard of the photos, can’t quite get a great shot, there are three there

The wonderful Mysore is featured in the UK Newspaper, The Guardian. Please check here.

See if you can spot two mentions and a photograph of our very own team.

We have beautiful art both natural flora and fauna on our roof terrace and peeking  through are images from the painted sides of bullock carts. 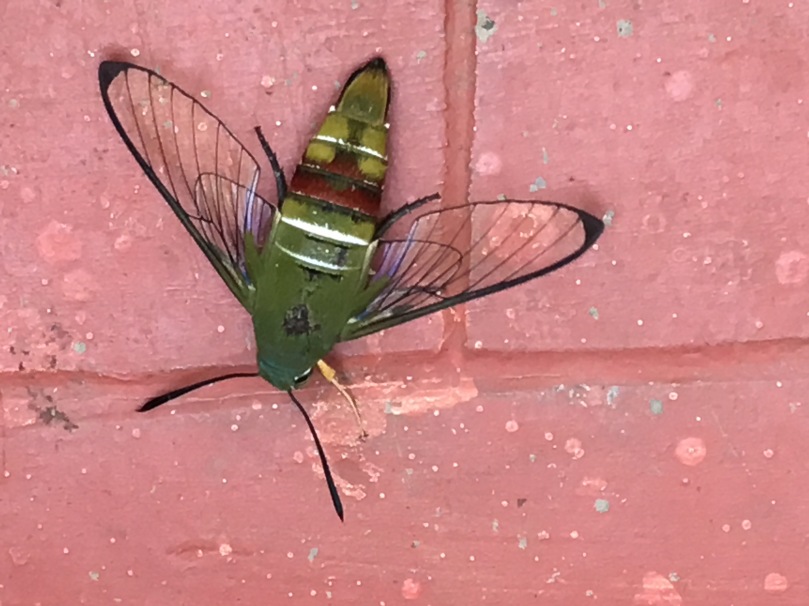 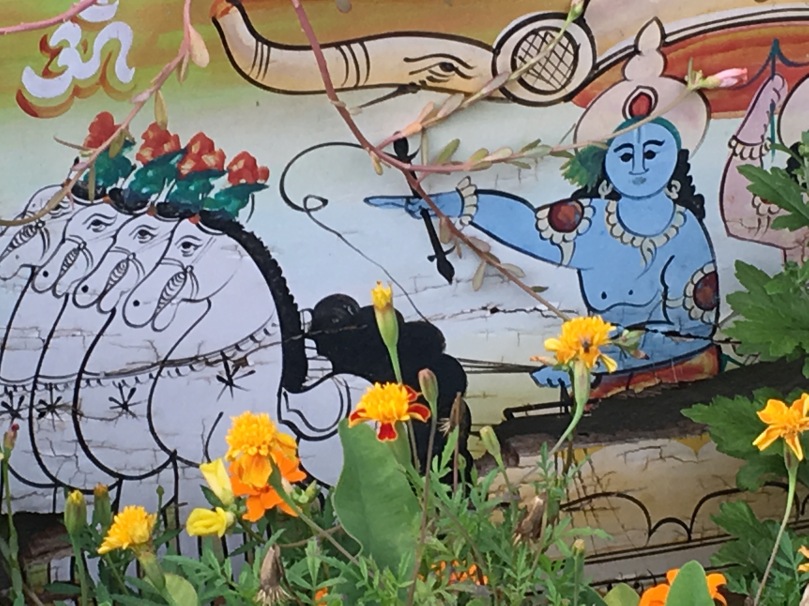 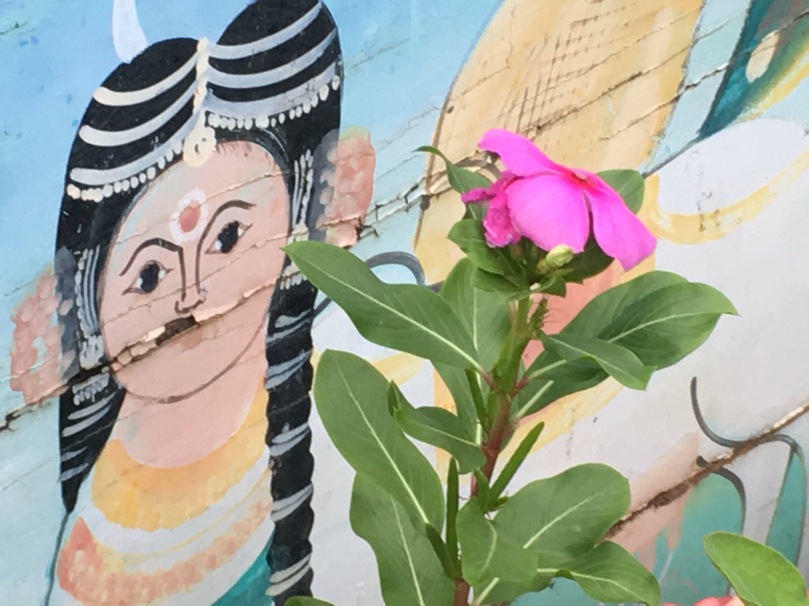 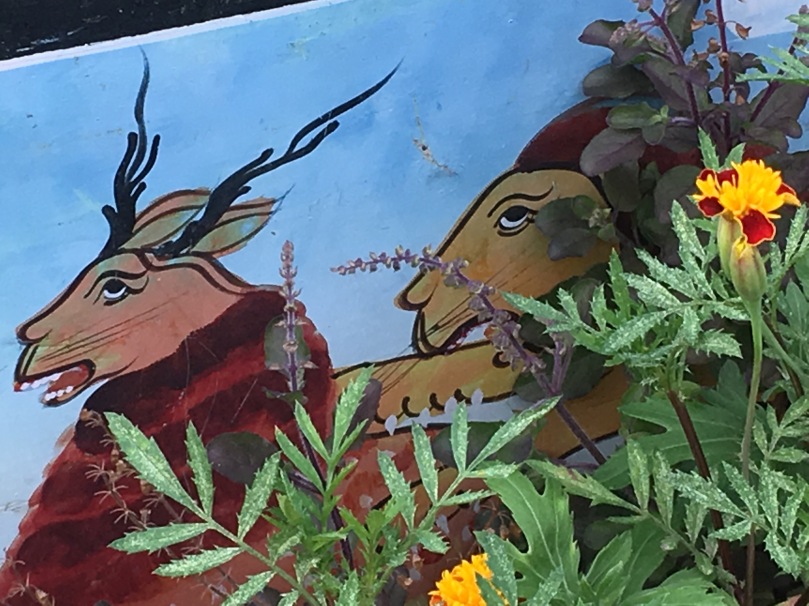 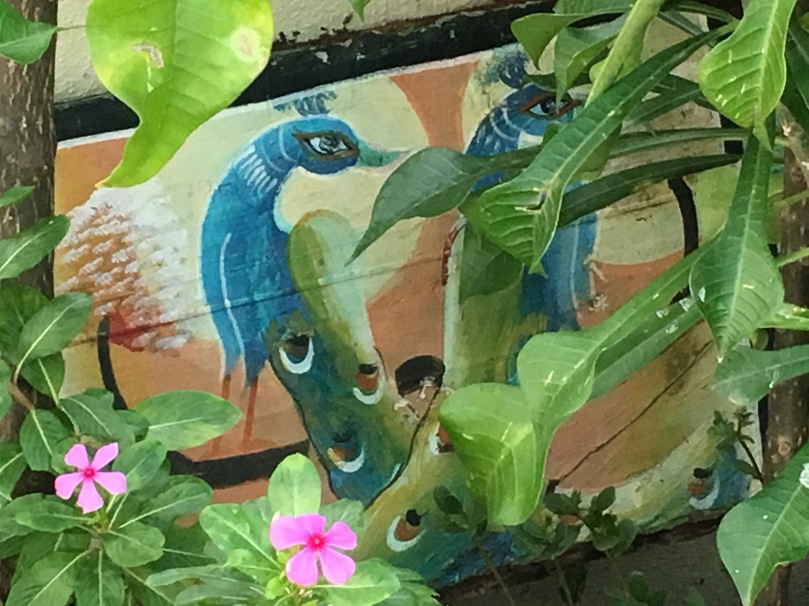 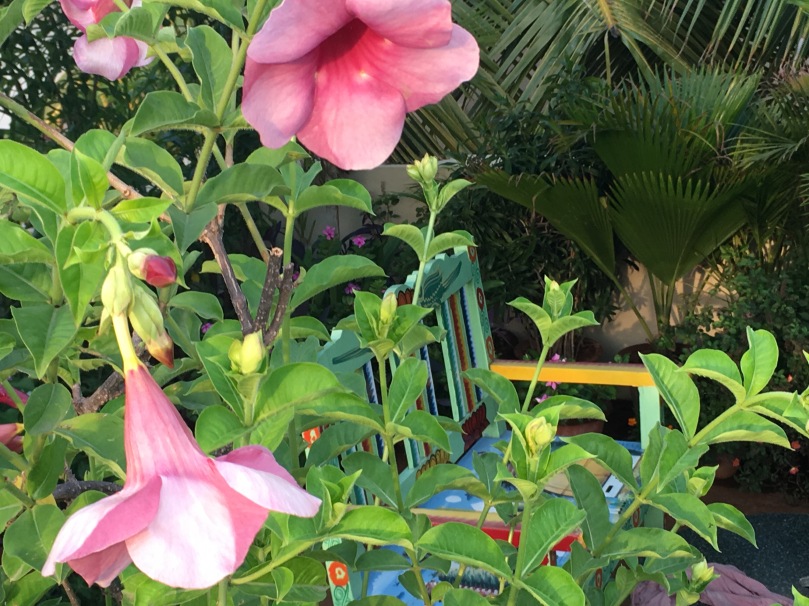 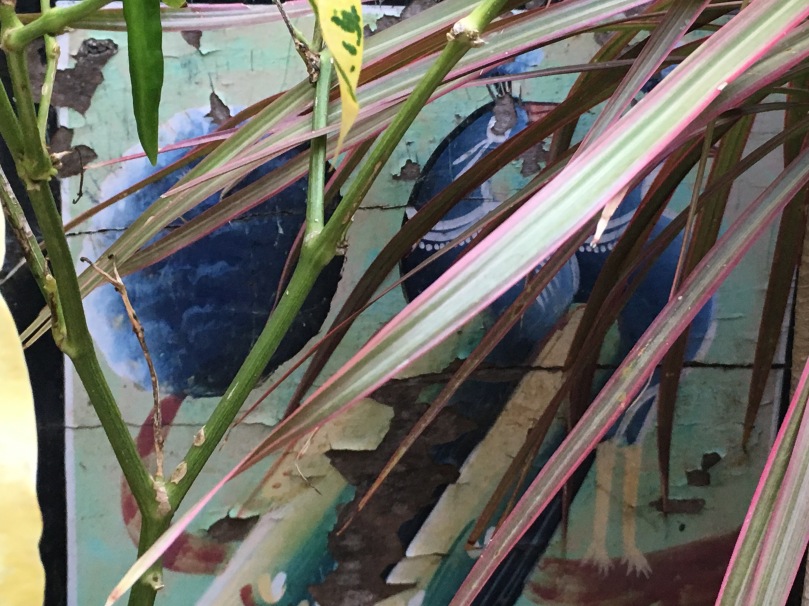 The new buds on our Brahma Kamla plants are also coming out. We hope to see them flower over one night  in the next two weeks. 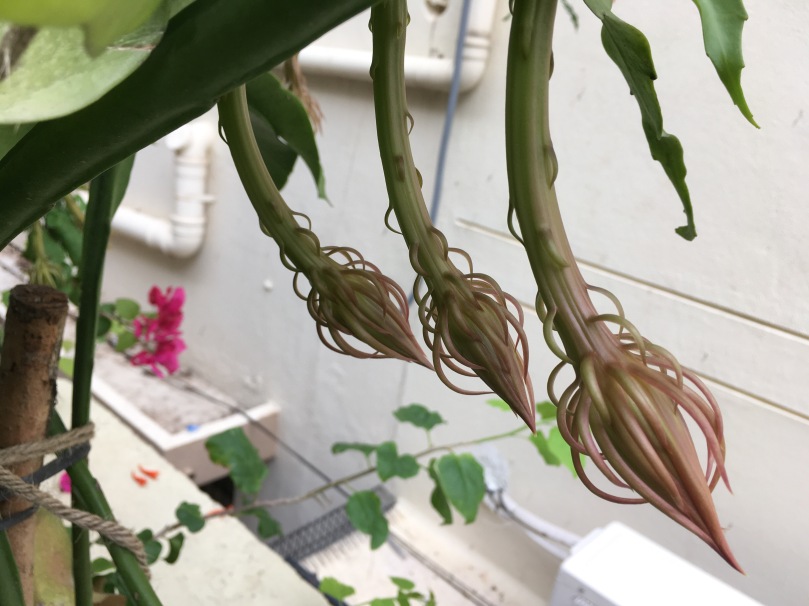 Our fashion conscious guests go for colour coded clothes. Previous guests of Mysore Bed and Breakfast and MyCycle Tours can now find their photographs by following the link to our flickr albums here Just look for the month when you stayed to find the appropriate album.

Mysore Bed and Breakfast is very much an open house, where we have now welcomed guests for over four years. A great community is beginning to develop. It’s formed from our guests, many who have returned or know of us through other friends, together with out team of drivers, gardener, cleaners, the hosts (Manjula, Lucy and the Yorkshireman) . There is also a network of other friends such as Homestay hosts and tour companies that collaborate to provide a great experience for visitors to this wonderful India. This helps create a richer life experience for us (eh… we don’t need to travel, the world comes here 🙂 !)  and a greater depth for our visitors. 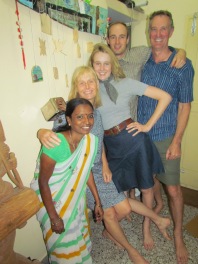 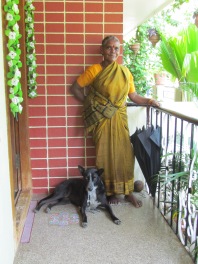 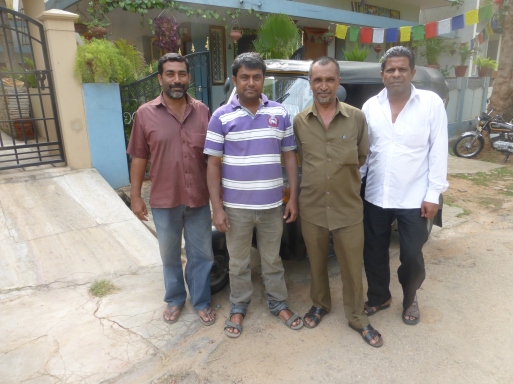 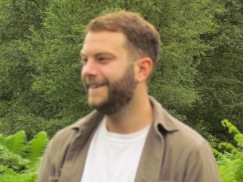 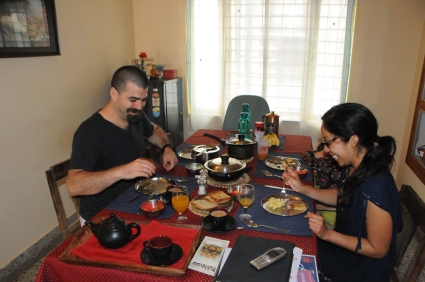 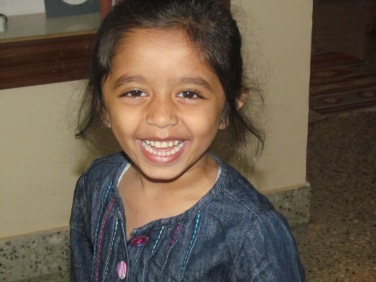 We’ve decided to introduce some of our community beginning with one of our guests.

Stephen F (a different Stephen F 😉 ) is a keen touring cyclist who has been to Mysore BnB maybe three times. He’s even left one of this cycles here for regular use! Originally from Northern Ireland he now lives in England and works as a communications consultant. Stephen goes way beyond the cycle tours we provide. He recently visited again doing a cycle loop travelling from here and taking in the National Parks. Previously he’s toured parts of Karnataka, Kerala and Tamil Nadu. On his first visit here we were amazed to realise we’d spoken to each other over the phone earlier in our careers in the early 1990s…. the coincidences of India, great stuff!

He’s just bought a rather expensive cycle and whenever we’ve had prospective guests planning on long and overnight tours we ask for Stephen’s help, whether its planning the tour, working out the best maps, finding suitable accommodation or general survival tips on cycling in India. Stephen has been a godsend. He now joins and has helped organise our family cycle tours back in the UK.

Stephen, as you would expect, has been on all our tours. Stephen and I have now started to develop longer tours taking in the local countryside, villages and my favourite, Srirangaptnam island.

See the map below.

Other cycling guests are also suggesting their favourite tours.

So this next year we’ll be inviting cyclists to come base their holidays here, join us on our established tours and we’ll help them design day tours in and around this wonderful area 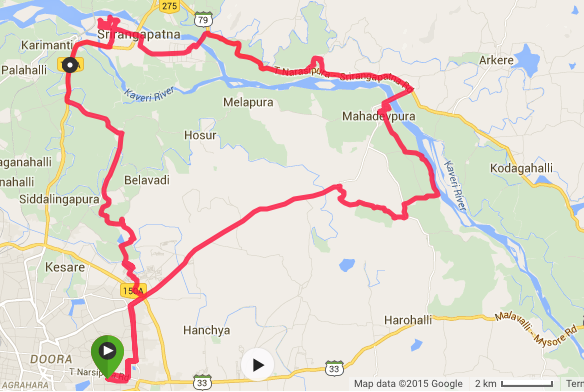