Manjula had a great time on her 43rd Birthday. Yes she’s 43! 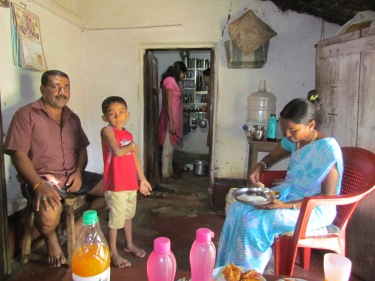 Travelling out to Srirangaptnam for Puja at the Rangatha Temple to visit Ranga, Laxmi, Garuda, Narsima and Hanuman (so many Gods in one place!) and dinner at hotel Roopa in the evening. Over 43 friends from around the world via facebook and email sent their greetings.. That also helped make her day. 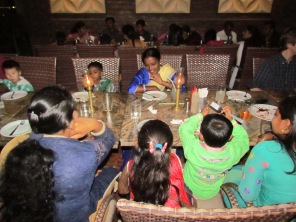 She now is planning her 50th party in the UK!

The Yorkshireman reached deep down into his pocket to pay for the meal for twelve people which cost much less than a recent, probably typical meal in London for three 🙂

As always in India it’s critical to get to the story under the surface. When I first met her, Manjula had three different birthdates. In India when someone doesn’t have a birth certificate (most poor and rural people, above a certain age) they use their TC or Transfer Certificate from school as evidence of their date of birth. As part of the rationalisation of her various inconsistent and conflicting forms of ID she had to sort it out and go for one.

She is a Queen but one birthday is enough!

4 thoughts on “What a wonderful birthday!”